Clatskanie PUD > About Us > History 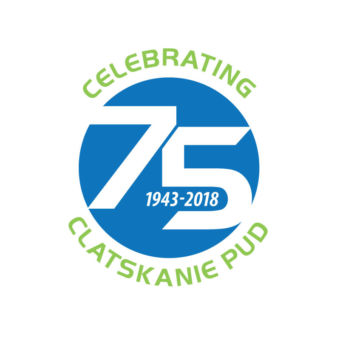 The Clatskanie People’s Utility District was formed by a majority vote of the people in 1940 in order to obtain the benefits of reliable low cost power for this area. A two mill tax was levied in 1941 which brought in approximately $4,500 and that has been the only cost to the taxpayers for forming the District. Revenue bonds totaling $175,000 were issued and the property was purchased from the West Coast Power Company for $150,000 in 1943. The bonds were retired 12 years later in 1955. Service began in 1943 to the Clatskanie and Quincy areas and has extended through the annexation to the Communities of Westport, Alston-Mayger and Rainier. In 2002, the District began retail sales to industrial customers outside of the District. The District owns 50% of the 36MW Wauna Co-generation facility, which began operating in 1997. The District also owns an 11MW gas turbine, Loki, since December 2001.

During 2017, 73% of the Districts power purchases were from BPA, of which 49.6% provided under a variable “Slice of the System” product and 23.4% under a fixed power Block product. The District power supply included 10% from the short-term wholesale market, 6.1% from EWEB and 10.9% from the Arrowrock Hydro Project. Under the Slice product the District had the right to 0.72661% of the output of the Federal Columbia River Power System (FCRPS) for 2017 and 2016. At historically minimum water conditions, this portion of the output, together with local generation, is sufficient to serve retail load within the District.

In its budgeting and planning, the District assumes water conditions based on 90% of average of long-term hydrological forecasts and current forward market prices to forecast wholesale sales of secondary power that is surplus to its retail needs. Surplus power is primarily sold to an industrial customer located outside the District under an evergreen sales agreement and to a lesser degree by wholesale markets.